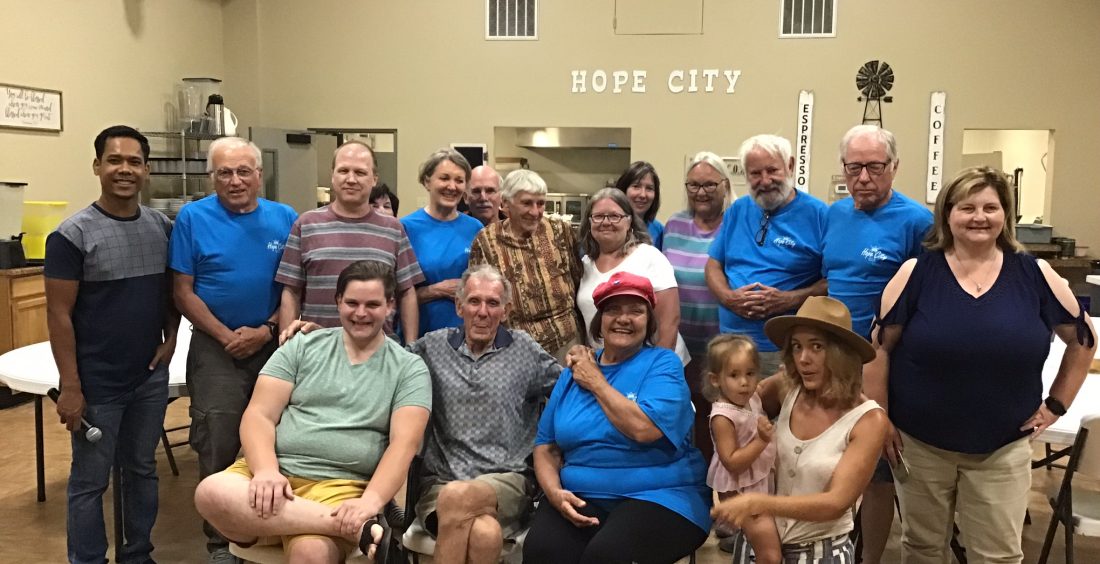 The process of long term recovery is not always easy for fire survivors. HCRN and our rebuilding project, Hope City, work to relieve some of the pressures homeowners face as they work to get home. It’s thanks to our volunteers who donate their time and labor to work on homes that we’re even to do as much as we do. Over the last decade, many of these volunteer teams have come from churches who decided to organize teams to work domestically. We talked with a few members of a recent team who stayed with us at our camp in Middletown about their experiences with us and elsewhere.

During their week with us, Green Mountain UMC had the pleasure of working with Dini Marotto. She lives very far off the beaten path and because of this, many of the usual options for getting her home have been close to impossible. The folks from Green Mountain set to work digging post holes and building trusses for Dini’s work site. The days were hot and the team had to be careful about their hydration, but every day Dini’s brother, Bill, would stop by on his four-wheeler to say hi and see how things were going. The team took the time to sit and talk with him and laugh with him.

Later in the week, during our Family Night, a time we invite our homeowners to eat with the teams working on their homes, Dini and Bill made their way to the dorm. The two of them were a hoot! They sat and shared experiences from their life, including a story about when they were young and the telephone had to be connected to a pole way outside the house. Dini was bright and vibrant and the team was so happy to laugh with her. One team member asked, “Dini, how old are you?” Dini pursed her lips and looked around and in her thick European accent she said, “I am 88 in two weeks.” As the night wound down, Dini and Bill made their way to the door, but not before hugging everyone good bye and thanking them again for all their work.

We talked with team member Greg Hise. He’s participated on a number of trips with Green Mountain as they’ve served across the western part of the US. Hise said, “It’s always a little bit different when we’re helping out individual people, rather than a whole group.” Hise and his team have done a lot of their service prepping items and areas to be used. Getting to work directly with an individual doesn’t present itself often. “It’s just real gratifying knowing I’m helping somebody. It gives me a feeling that I’ve really accomplished a lot this week, for somebody else rather than myself.”

We’d like to extend a great big thank you to the team from Green Mountain UMC for all of their hard work, and for making such a difference in the lives of our homeowners.

If you’d like to be a part of Rebuilding Homes and Restoring Lives, send an email to Travis Cox at [email protected] or give him a call at 574-333-7728.