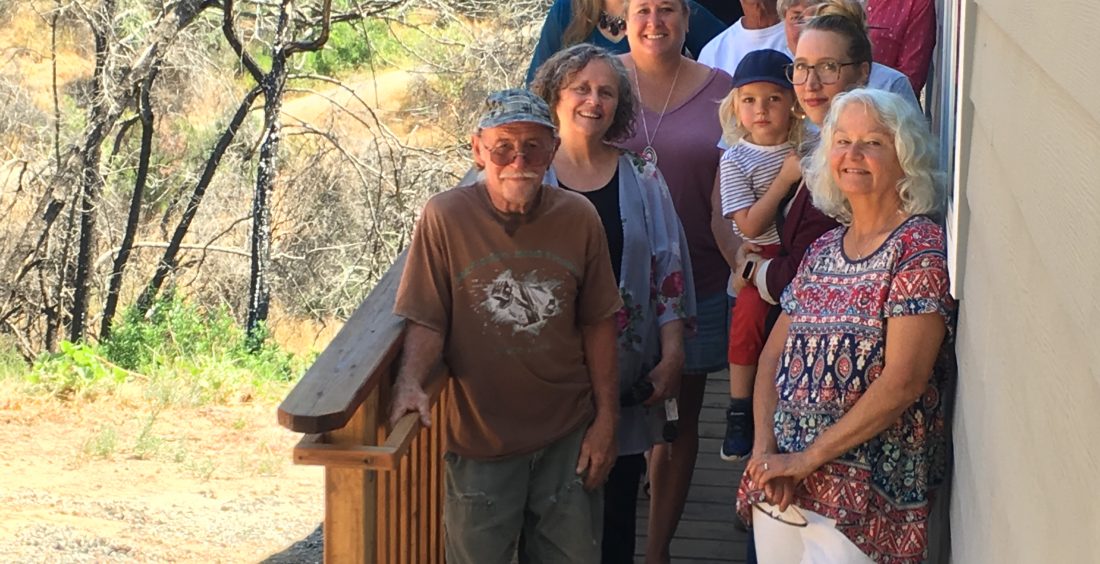 It’s time again for our favorite story to share: a homeowner coming home. We were proud to celebrate the home dedication of Bill Raby and his family. They lost their home in the Redwood Valley Fire of 2017, and today they have a brand new home and a fresh start. HCRN was proud to host the dedication, which was attended by representatives from many of the organizations who partnered to make this home possible for Bill and his family. Those in attendance include the American Red Cross, Redwood Valley Community Church, the Community Foundation of Mendocino, as well as the Mendocino ROC (Rebuilding Our Community) organization. North Coast Opportunities, and United Methodist Committee on Relief also sent representatives.

Kevin Cox, the CEO and founder of HCRN, started things off by saying that it’s our, “Heart and desire to see you get home.” HCRN and our rebuilding project, Hope City, have endeavored to restore hope to those who have lost it. We are coming up on 20 years of disaster response, it’s still just as amazing to get a family home as the first home we built. Cox commented, “It’s supposed to be 105 today, and it’s nice in cool in here,” as those in attendance chuckled and were glad to be in a nice cool, complete home.

Representatives from each partner took a small time to talk about their involvement on the Raby home, and what it means to help restore this community. The representative from the American Red Cross thanked everyone who was a part of the project, especially thanking Hope City’s construction team of Steve Dangler and Matt Jusaczyk. She told Bill, “We’re so glad you’re home!” The Community Foundation representative compared the process of recovery in Mendocino to, “Building the plane as you’re flying it,” and that getting the Raby’s home was like seeing the plane be finished and landed safely.

Randy Dorn, a retired contractor and representing Redwood Valley Community Church, could barely contain his joy. He’s been a member of the community for over 40 years and after the fire, did whatever he could to help his community recover. Dorn said, “I feel so privileged to serve any part at all.” Next Steve Dangler, Hope City’s Mendocino construction manager, spoke briefly. He is also a member of the community who had been in construction for most of his life, and found that in retirement he had time to give back. He led several teams of AmeriCorps members, highlighting when the team arrived and began work on Raby’s home. The team had come from tearing out the insides of homes ruined by flood, and when they saw the frame for the home asked, “Will we be able to see this get finished?” Steve told them, “Yeah, yeah you will.” He went on to say, “I feel very blessed, and I feel very encouraged. I can’t wait to do more for our community.”

At each home dedication, HCRN likes to present the home owner with a few items as a house warming gift. The first was a quilt, made by one of our church partners; the next, a small wall decoration to make the house feel like home. We also like to present a bible and a cross, as a reminder that is was God who orchestrated all of this, and allowed every partner who worked on this home to get Bill and his family in to their house.

Thank you to everyone who was a part of this rebuild. You have made such a difference, not just in the lives of the Raby family, but also in the Redwood Valley community.

If you would like to be a part of Rebuilding Homes and Restoring Lives, contact Travis Cox at [email protected] or give him a call at 574-333-7728.